Established on 11th November 1944, the Government Museum, Bharatpur is located in the centre of the historic Lohagarh Fort.  Artefacts collected from various parts of the Bharatpur princely state were initially displayed in a public library under the supervision of H.H. Maharaja Sawai Brijendra Singh in 1939. In 1944, the collection was moved to the Kachahri Kalan building in the Lohagarh Fort which was later converted into a museum. The Kachahri Kalan building used to be the administrative block for the rulers of Bharatpur state. Eventually, the Kamara Khas building in the Lohagarh Fort, which was previously the personal block of Bharatpur royalty, also became an essential building where artefacts from the museum were displayed. The Kachahri Kalan and the Kamra Khas buildings were built during the reign of Maharaja Balwant Singh Ji in the first half of the 19th century. The museum, focusing on stone sculptures, inscriptions, terracotta items, coins, weapons, miniature paintings and local art, displays over 581 stone sculptures and 861 local art and craft wares and ancient scriptures.

The museum’s Archaeological Section consists of various artefacts of local handicrafts and stuffed wild animals. Sculptures excavated from villages such as Noh, Mallah, Bareh and Bayana, among others, that hail from the Kushan period (1st century A.D.) to the 19th century A.D. are also displayed. The Arms Section of the museum displays weapons and armours used by the Jat warriors from the 17th century along with some weapons acquired from the British Empire.  The Handicraft Gallery displays exquisitely painted Chinese and Indian hand fans, painted vases, photo frames, and miniature paintings. It consists of sculptures of camels, fruits and vegetables, antimony boxes, baskets, bowls, candle stands, decorative glass pieces, bottles, bronze sculptures of soldiers and European ladies and more.

While wall stands, slide screens, wooden side and dressing tables, overhead hanging hand fans are displayed in the Furniture Gallery, a section on musical instruments includes an ancient gramophone machine and an organ among other artefacts. The Garments and Textile Gallery displays objects such as table cloths, royal poshaks and turbans in local style. Silverware consisting of many trays, spoons and other intricately carved items can be seen on display in the Silverware Gallery. These artefacts displayed in the Furniture Gallery, Musical Instruments Gallery, Garments and Textile Gallery and the Silverware Gallery belong to the erstwhile Royal House of Bharatpur.

Apart from the exhibits, one can see architectural delights of the Darbar Hall, Choubhaga Chaman Bageechi, Tanks, Fountains, a Baradari which is a large pavilion with 12 doors and fifty-six pillars and a Mughal period Hammam (Persian bath) within and around the Museum complex. 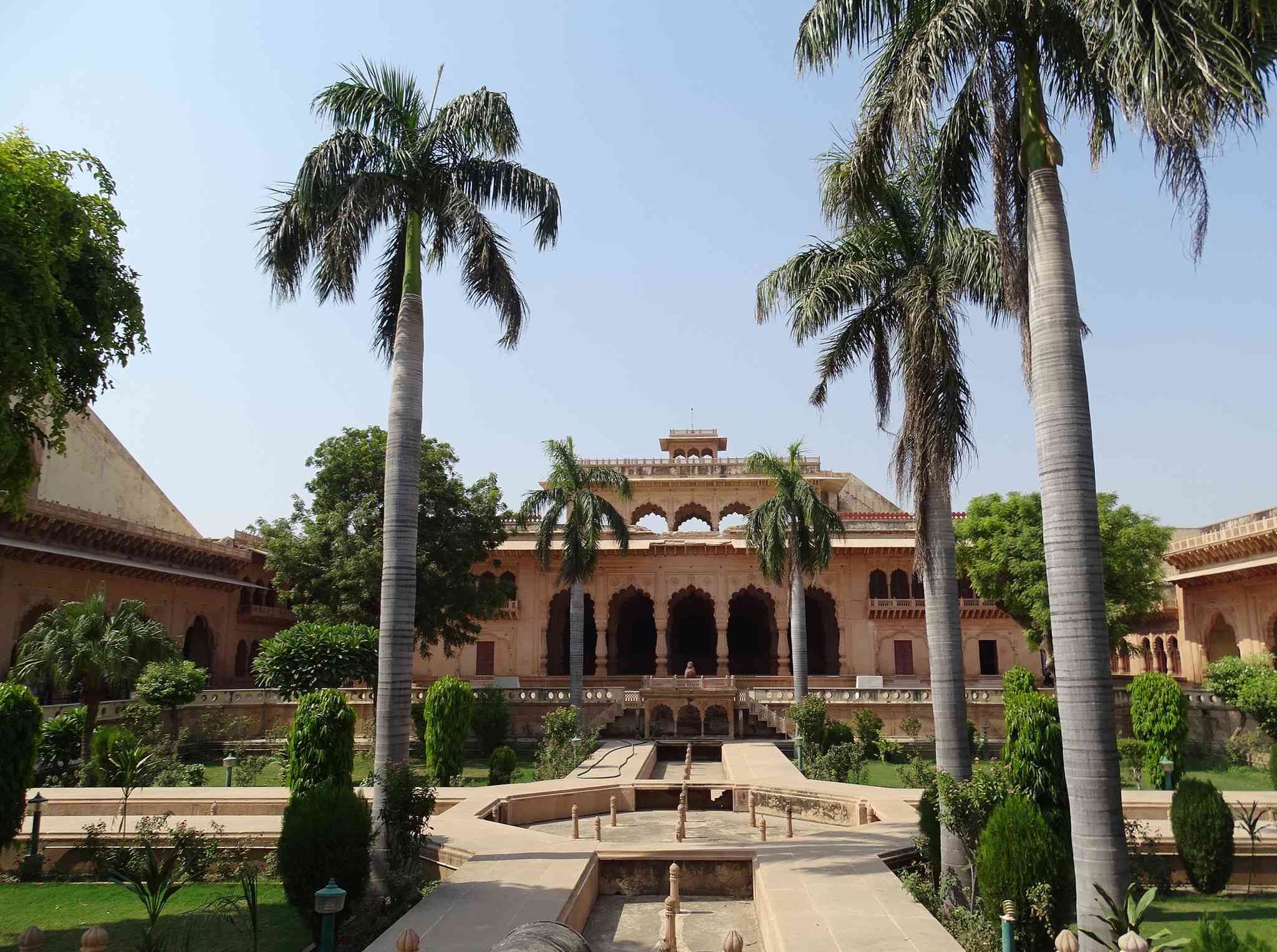 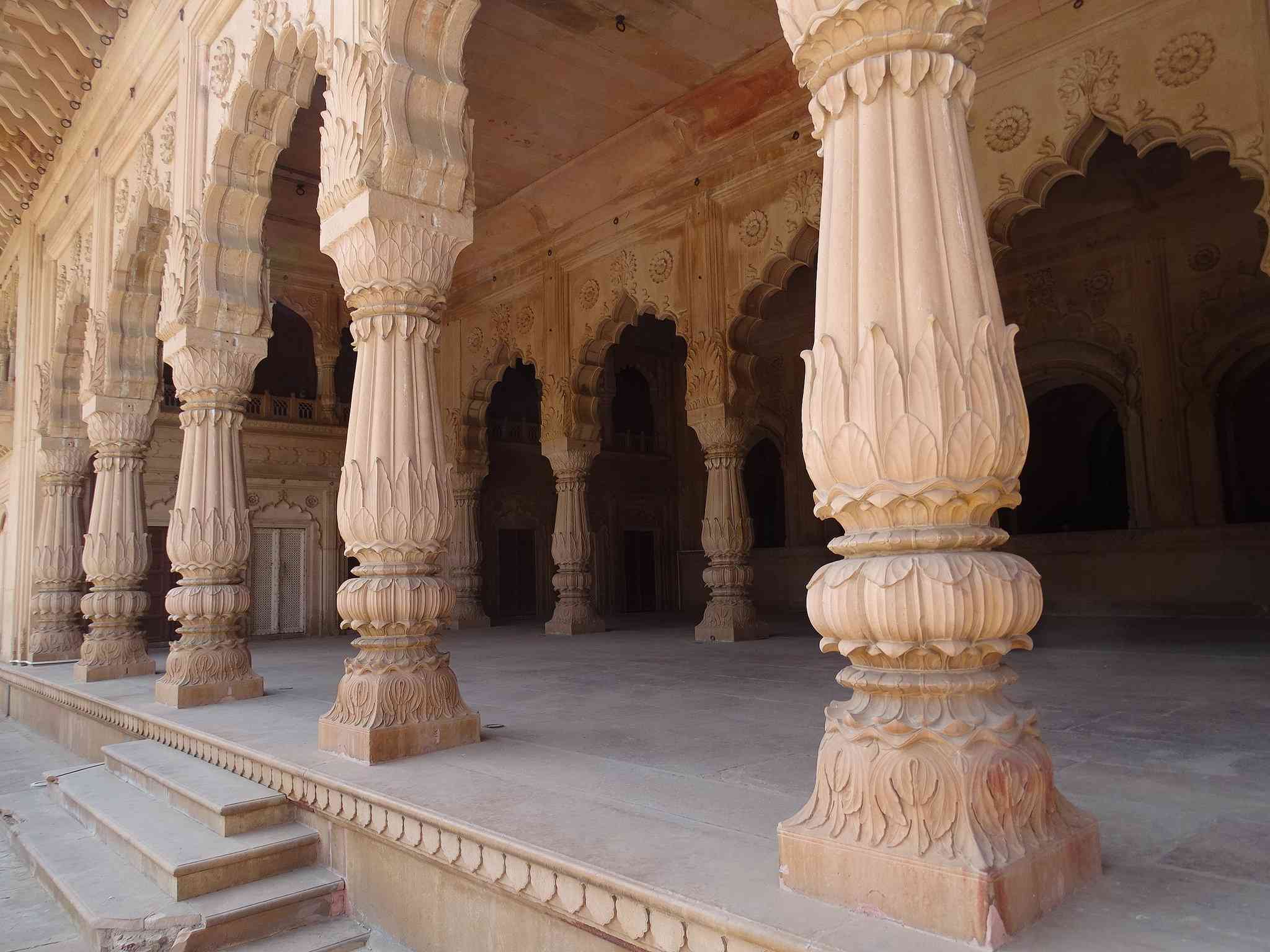 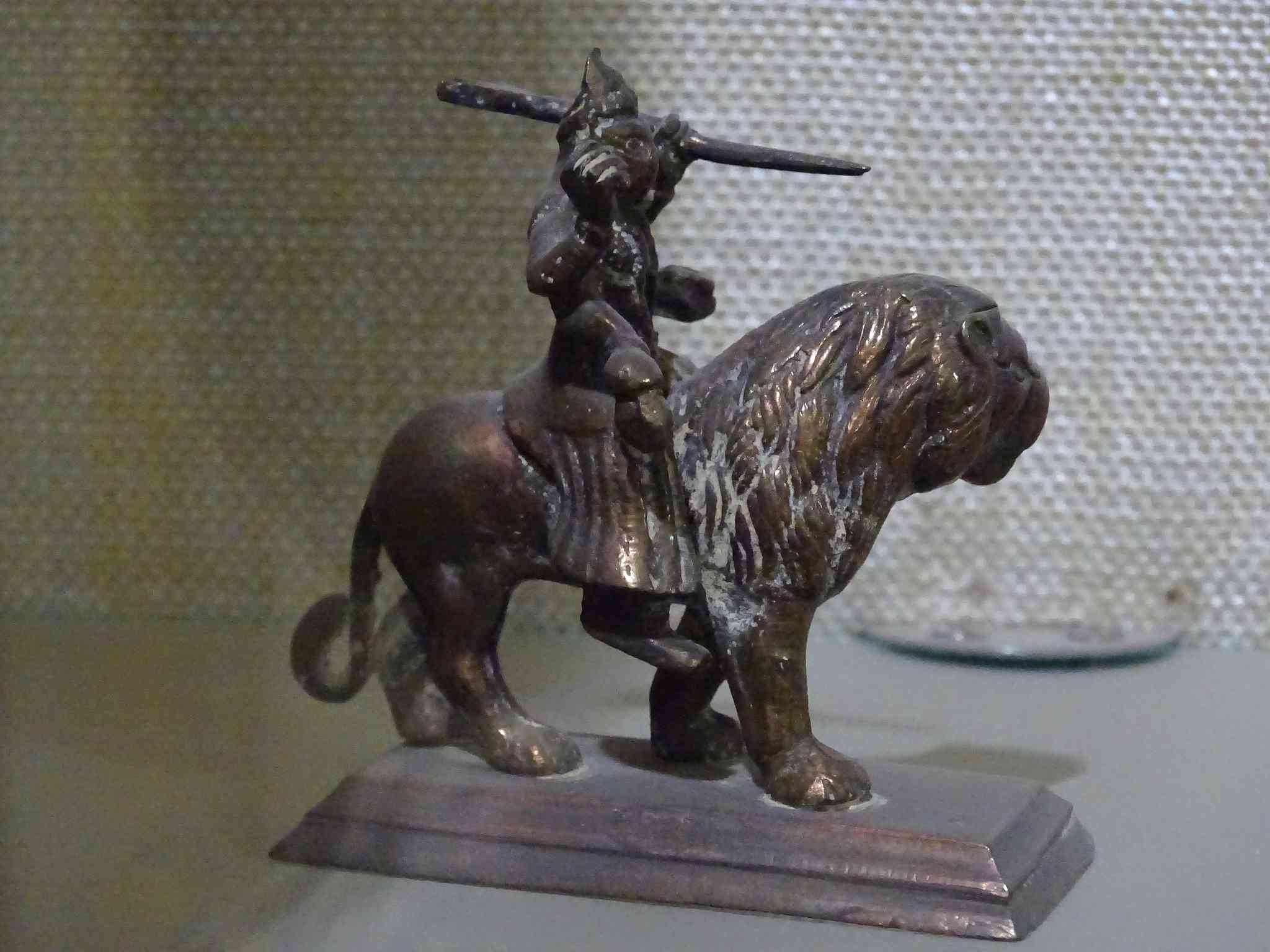 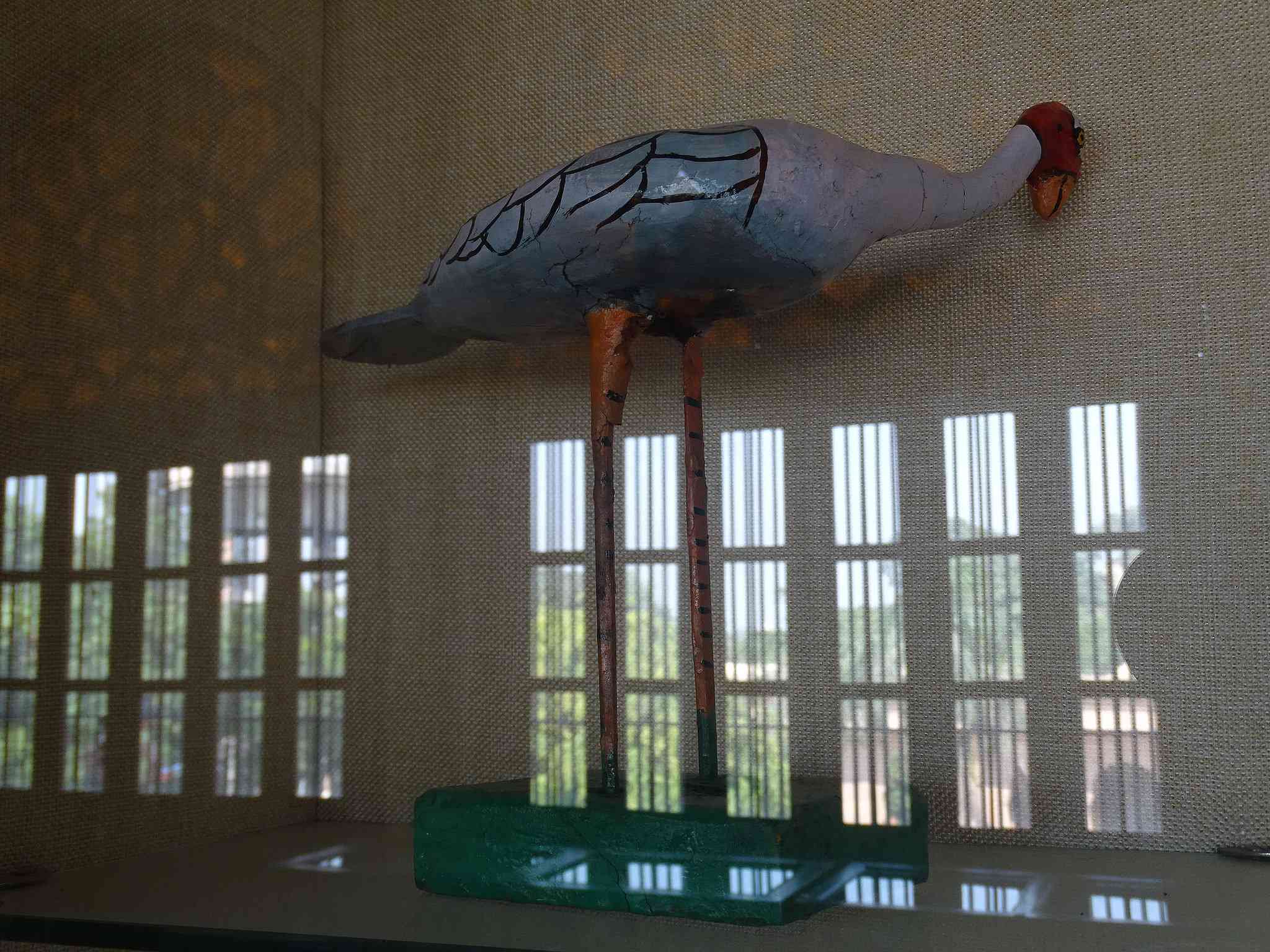 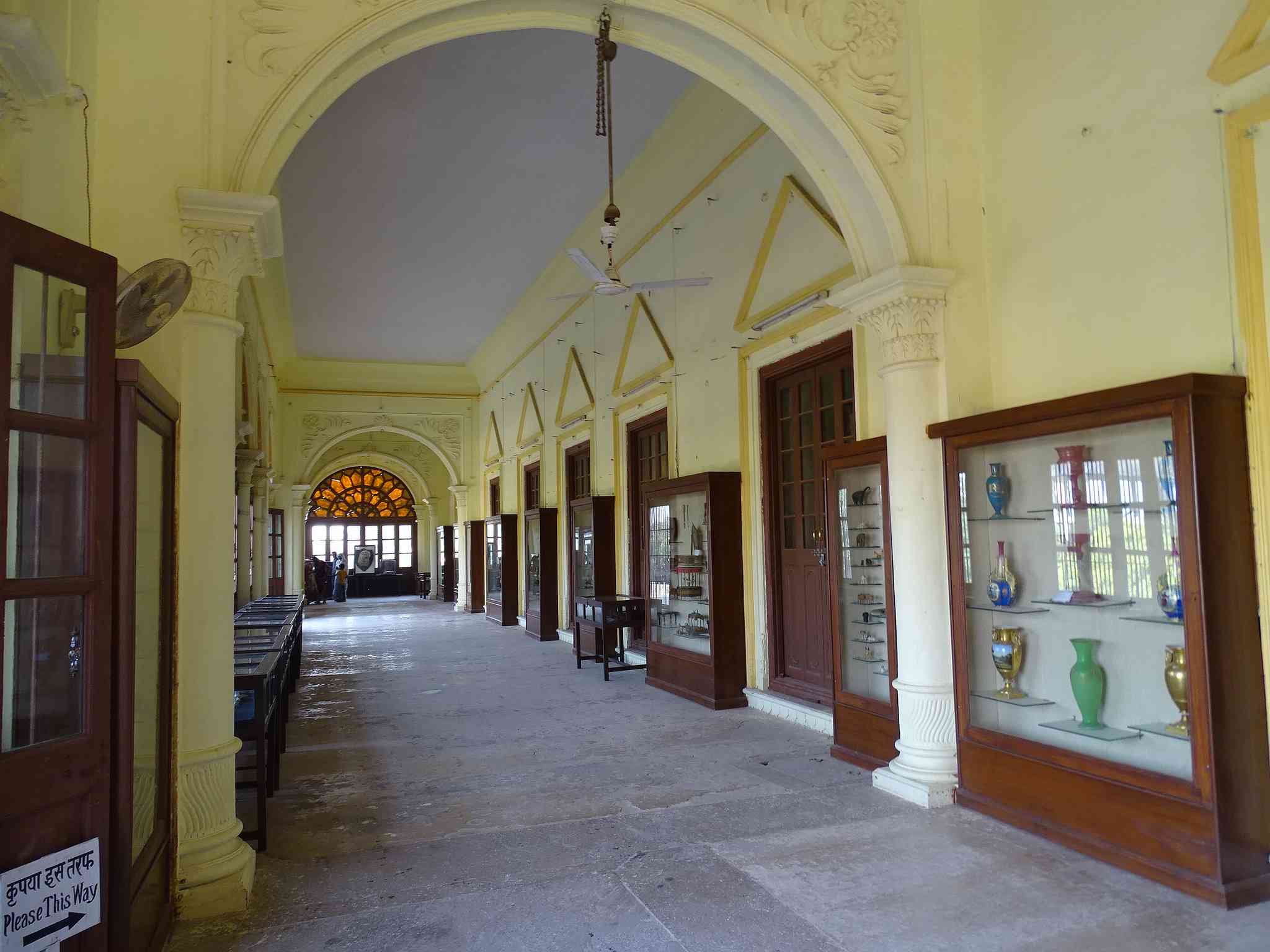 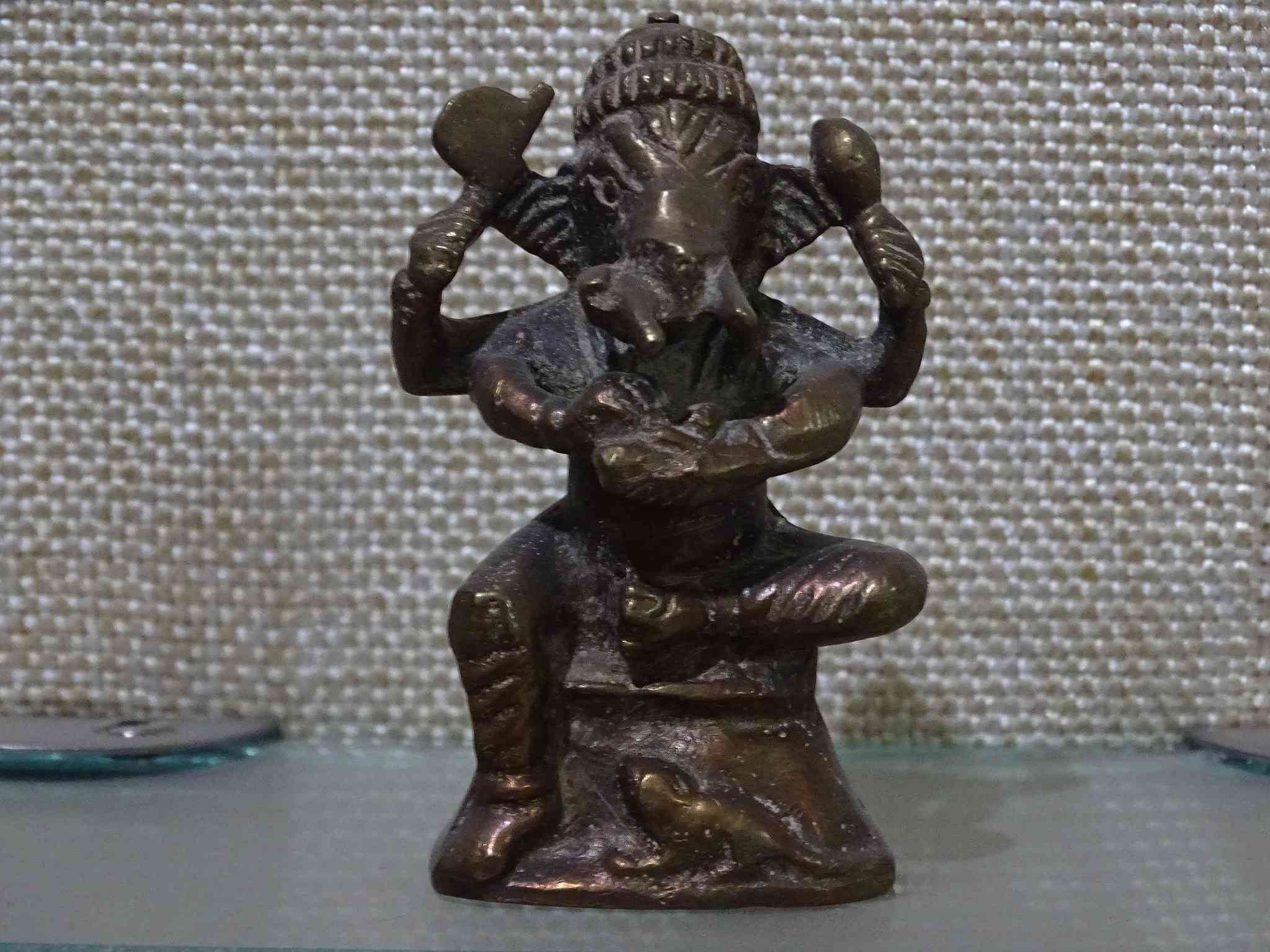 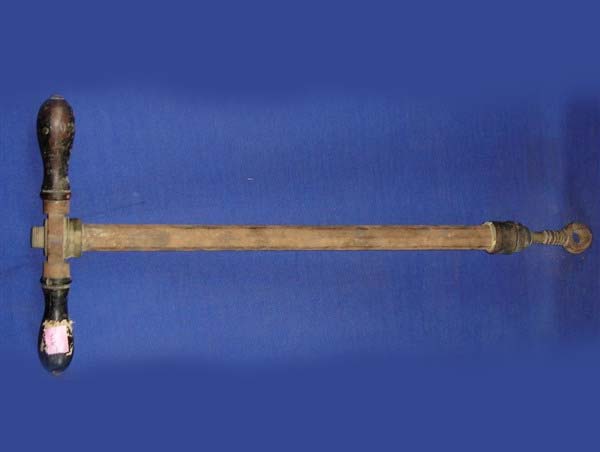 Medium
Iron, Wood
Image title
Air pump to fill air in the gun. It is made of iron having two wooden handles on the top.
Image Source
http://museumsrajasthan.gov.in/museum/bharatpur/artifact-detail/131830
Image 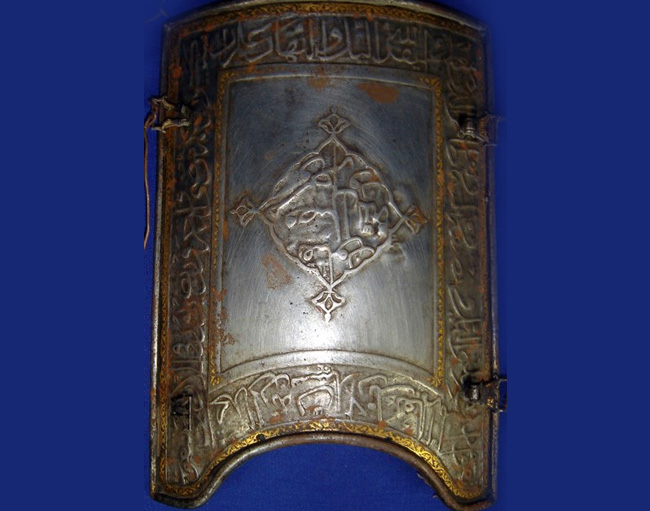 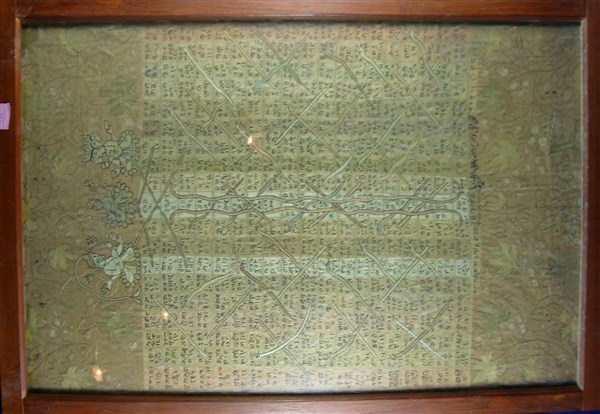 Image title
Chausar game embroidered on a cloth. On top Brahma, Vishnu and Shiva are embroidered and at bottom Maharaja Pratap Singh (name of the king) and date V.S. 1667 posh are written in Hindi and Persian.
Image Source
http://museumsrajasthan.gov.in/museum/bharatpur/artifact-detail/134213
Image 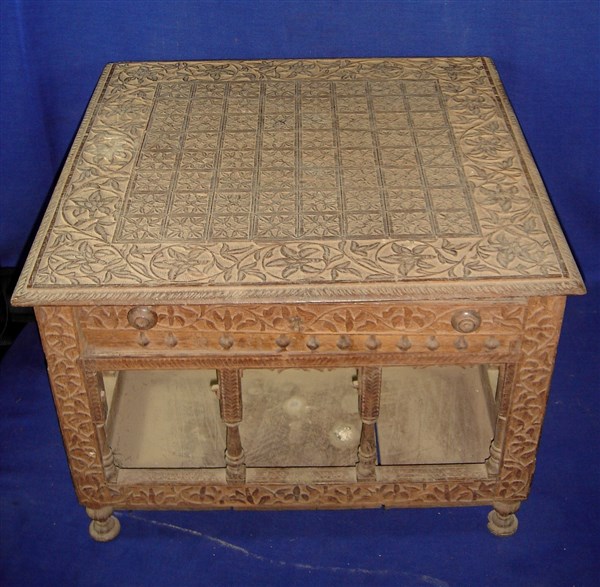 Wooden stool having chess board on top and a drawer (to keep dices) below the board. It is decorated with carved vine and blossom design. The top has a crack running across it. 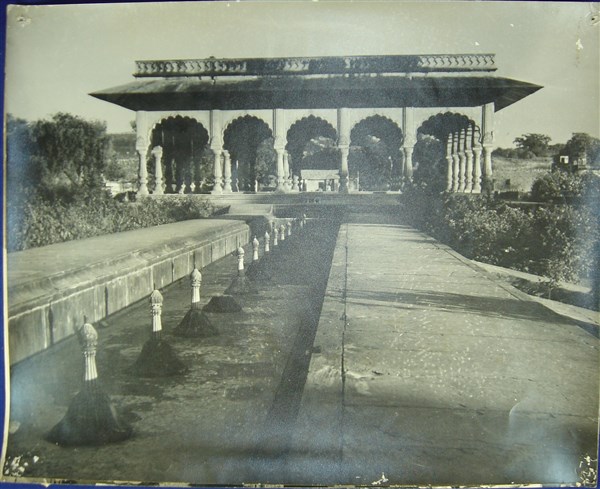 Black and white photograph of Barahadari - Deeg with fountain. Black and white photograph of full length portrait of H. H. Maharaja Sawai Brijendra Singh. It is framed in glass. Ivory dice three in numbers, rectangular in shape having incised circles on it. 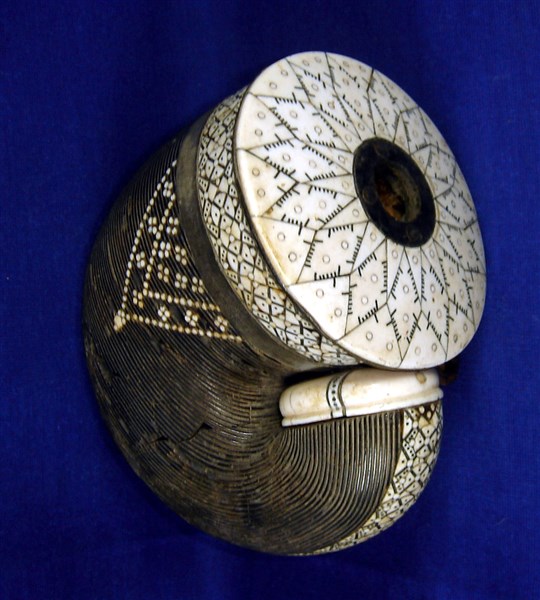 Horn shape gun powder box with a hole at the enter of the top to put the powder in. It is designed with ivory work. Oval shaped iron helmet painted with silver colour on the exterior and has embossed seen and moon design. The inner side is plain. 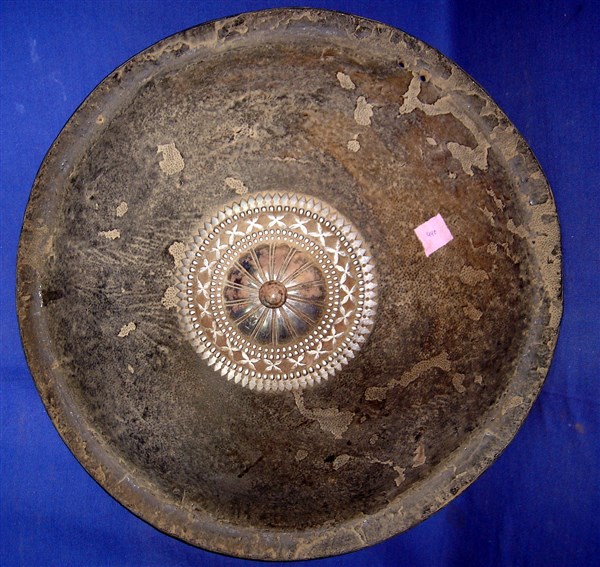 Circular shield made of Rhinoceros leather having a lotus shape iron bob with cross pattern in the centre. 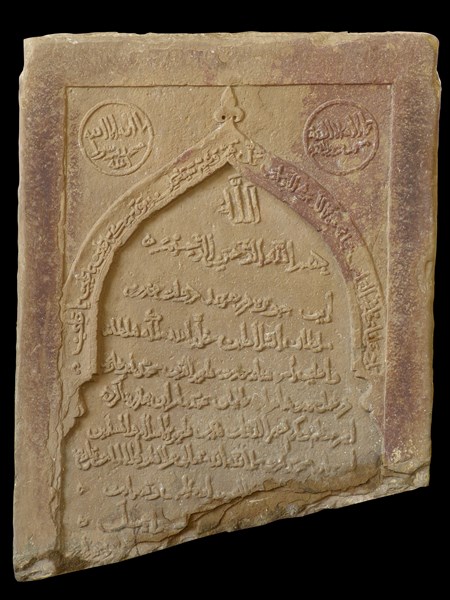 A fragment of Persian inscription of Zahiruddin Mohammad Babar contains nine lines, records the name of Binee Kamran as a Governor of Bayana. It is decorated with calligraphy in arched shapes.

Opening Days
Sunday
Tuesday
Wednesday
Thursday
Friday
Saturday
Opening Time
09:00 a.m.
Closing Time
05:00 p.m.
Other Information
The museum is closed from 1pm - 3pm
Interesting things about the Museum
1. The museum is located in the centre of the historic Lohagarh Fort of Bharatpur
2. Sculptures excavated from villages such as Noh, Mallah, Bareh, Bayana etc. that hail from the Kushan period (1st century A.D. to 19th century A.D.) are displayed at the museum
3. Apart from the exhibits, one can see architectural delights of the Darbar Hall, Choubhaga Chaman Bageechi, Tanks, Fountains, a Baradari (a large pavilion with 12 doors) of fifty-six pillars and a Mughal period Hammam (Persian bath) within and around the Museum complex.