Museum Address
The City Palace Museum, The City Palace
City
Udaipur
State
Rajasthan
Pin Code
313001
Email
mmcf@eternalmewar.in
Phone Number
+91 294 2419021-9
Museum website
https://citypalacemuseum.org/
Are there any docents or guides who visitors can directly call to book for a guided tour?
Yes
When was the museum established?
1969
Main category
Multi - Purpose
Other categories
Palace Museum
Briefly describe the history of the museum, its collection and donors.

The City Palace Museum, Udaipur is housed within the very iconic, 450 year old Palace, the former abode of the rulers of Mewar. It was formally declared as a Museum open to the public in 1969 through the efforts of Maharana Bhagwat Singh Mewar of Udaipur (r. 1955-1984 CE). The purpose was to ensure the safekeeping of the rich heritage of the land, and honour of its people, in a post-Independence scenario.

It is home to a remarkable collection of objects, including paintings on cloth and paper, historic photographs, sculptures, textiles, silver, and arms and armour; created between the sixth century and the present day, with the extraordinary collection shedding light on the living heritage of Mewar as also the local, regional, and international exchanges in the realms of art, architecture, religion, and culture.

Walking through the Museum

One enters the City Palace through the Badi Pol and Tripolia Pol. After crossing the Manek Chowk, the visitor is greeted with paintings recounting the Battle of Haldighati. A highlight of the collection is the armour worn by Maharana Pratap during battles.

Visitors then proceed to the Mardana section where several rooms are adorned with Mewar paintings and display special artwork such as opaque glasses in the Moti Mahal, peacock shaped glasswork and tiles in the Mor chowk and blue tiles in the Chini Chitrashala. Installations in the Mardana provide a glimpse of the lifestyle of the rulers as they resided in the palace apartments.

One then proceeds to the Zenana complex which houses the museum’s artefacts. The sculpture gallery displays temple slabs and figures of gods and goddesses from the 7th to the 17th century. The Symphony of Mewar shows musical instruments from the collection of the House of Mewar. The Jas Prakash gallery details the various phases of the development of the city palace through models and videos. The paintings made by the artists of the Mewar school are found in the Bhagwat Prakash gallery.

Flanking the courtyards are the textile and palanquin galleries showcasing traditional royal garments such as Ghagra-Choli, Angarakha and Choga as well as wooden palakis used by the rulers; covered with embroidered curtains for women and open carry-chairs such as Tam-Jaams and Takhats for men. One ends in the silver gallery which showcases the silver collection of the Mewar rulers.

The Museum attempts to make each visit memorable for everybody. It has provisions for enhanced accessibility such as wheelchair facility, accessible toilet, and lift, ramps, side-railings, child-care room, drinking water, seating etc. For queries, there are Information desks. Several workshops, seminars, talks, tours, walkthroughs, trails etc. are organized in the physical and digital space. Library service is available at a nominal fee. The Museum also has well-equipped Conservation Laboratories that is occasionally used as a learning resource by students. 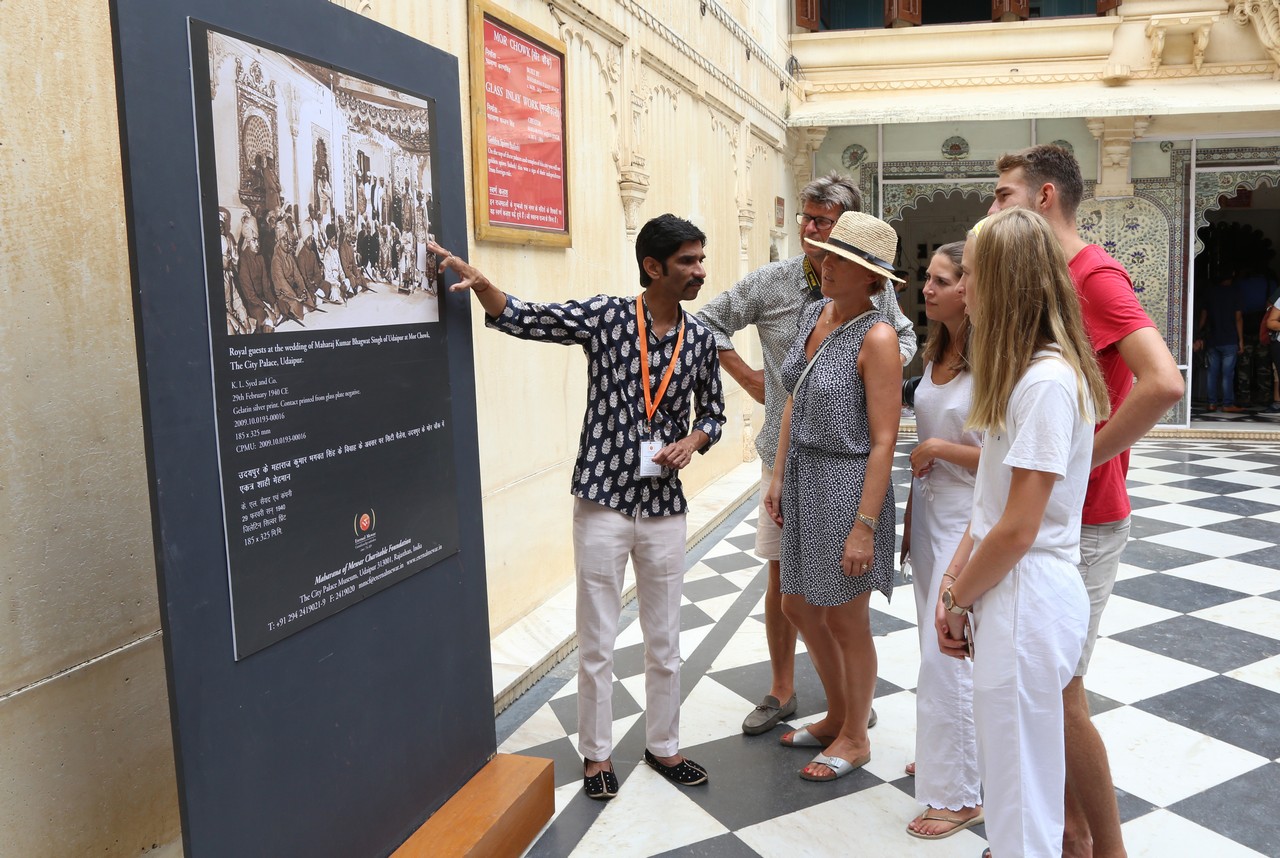 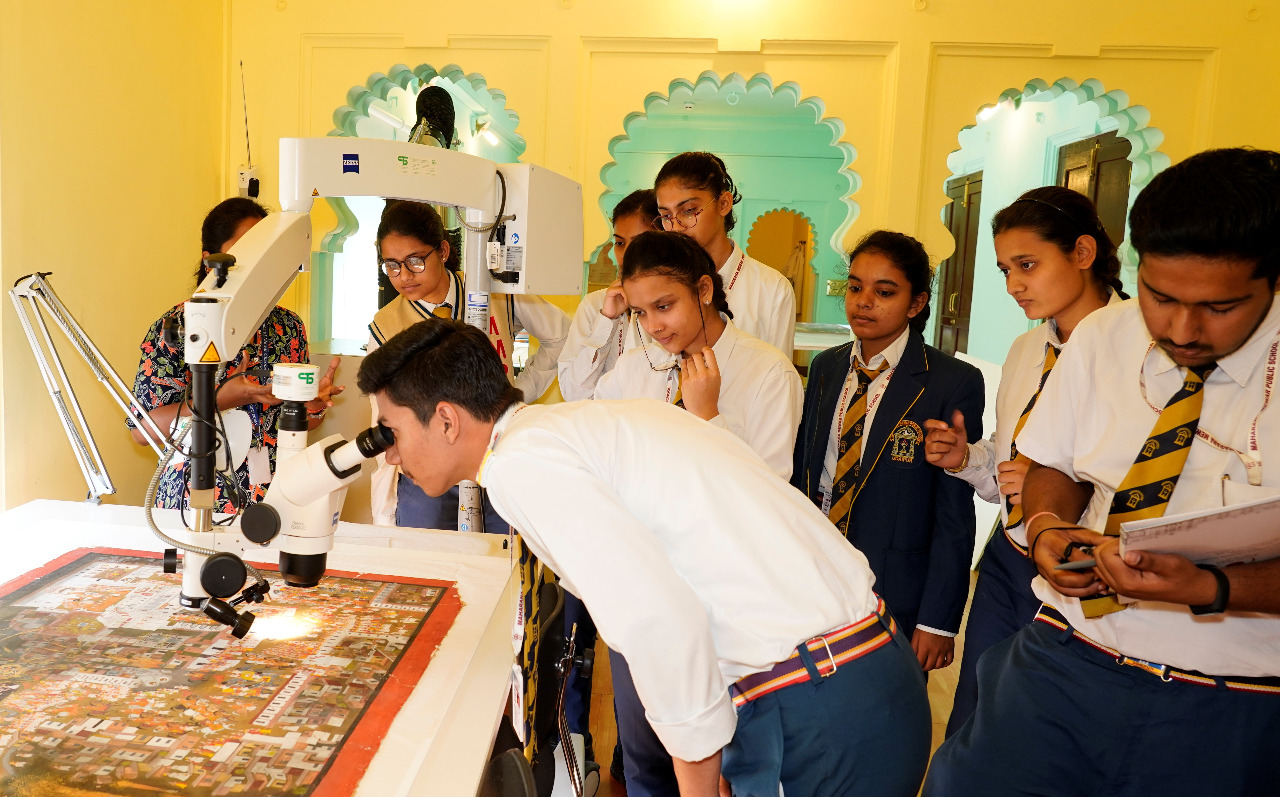 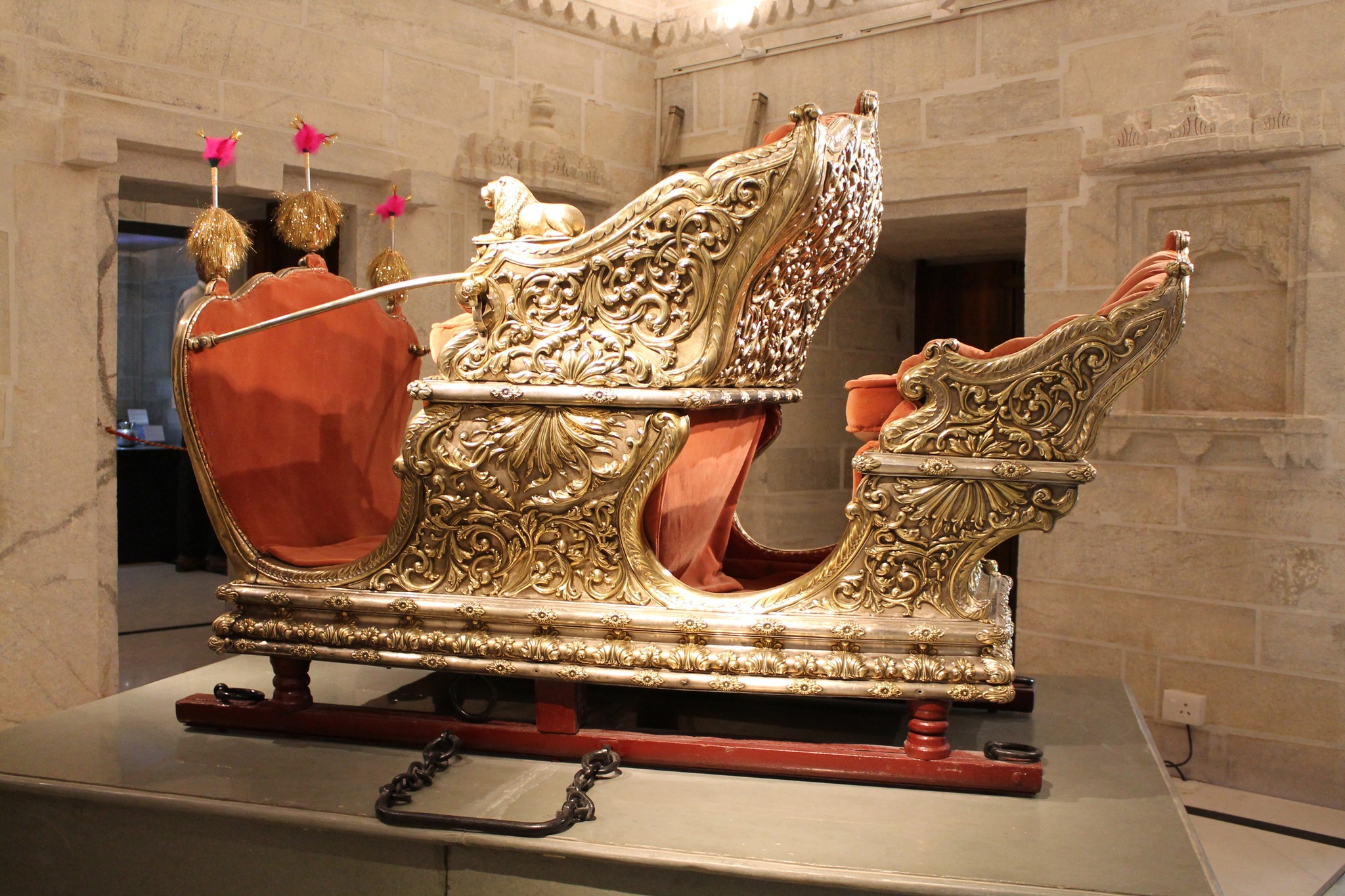 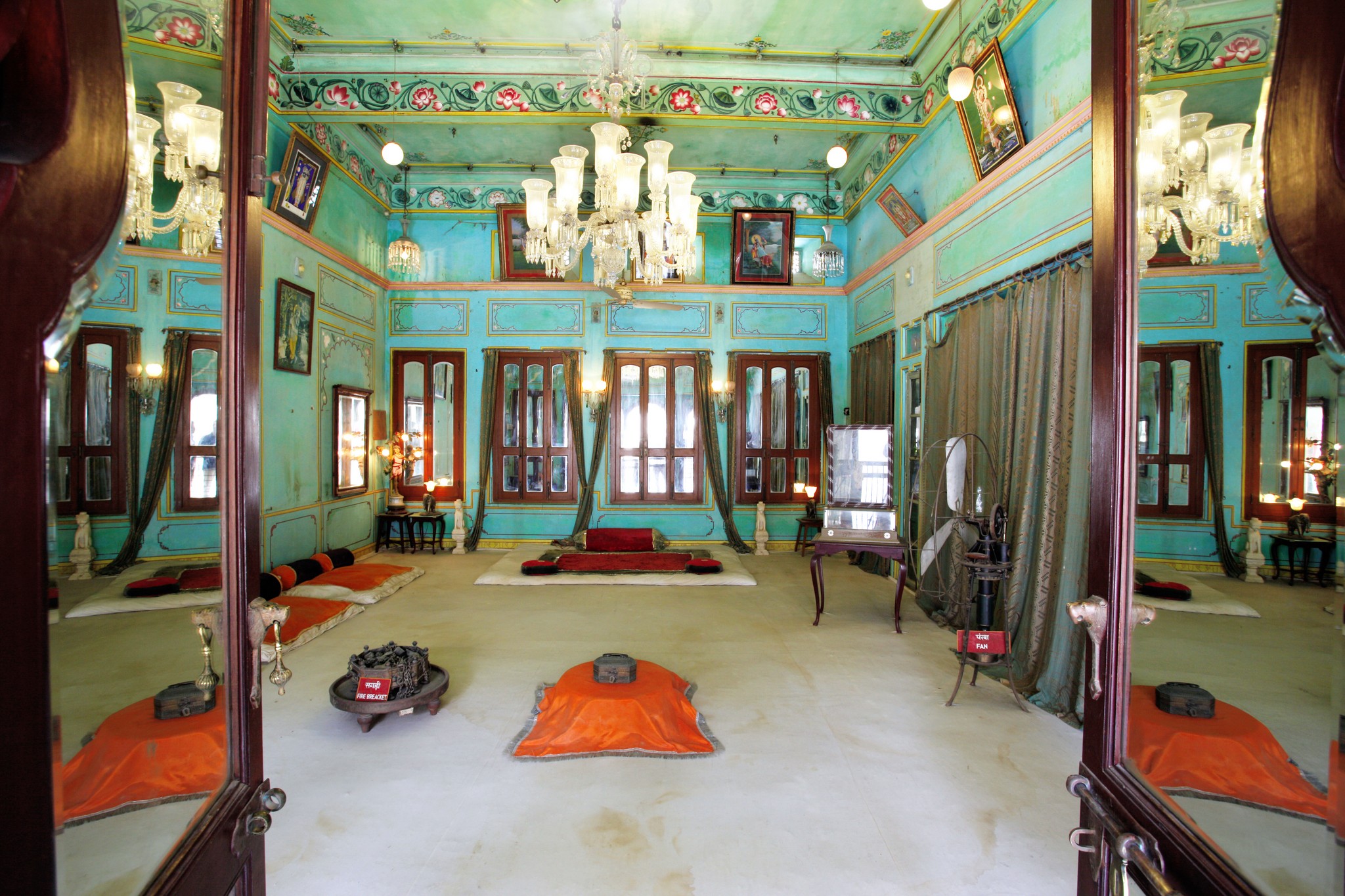 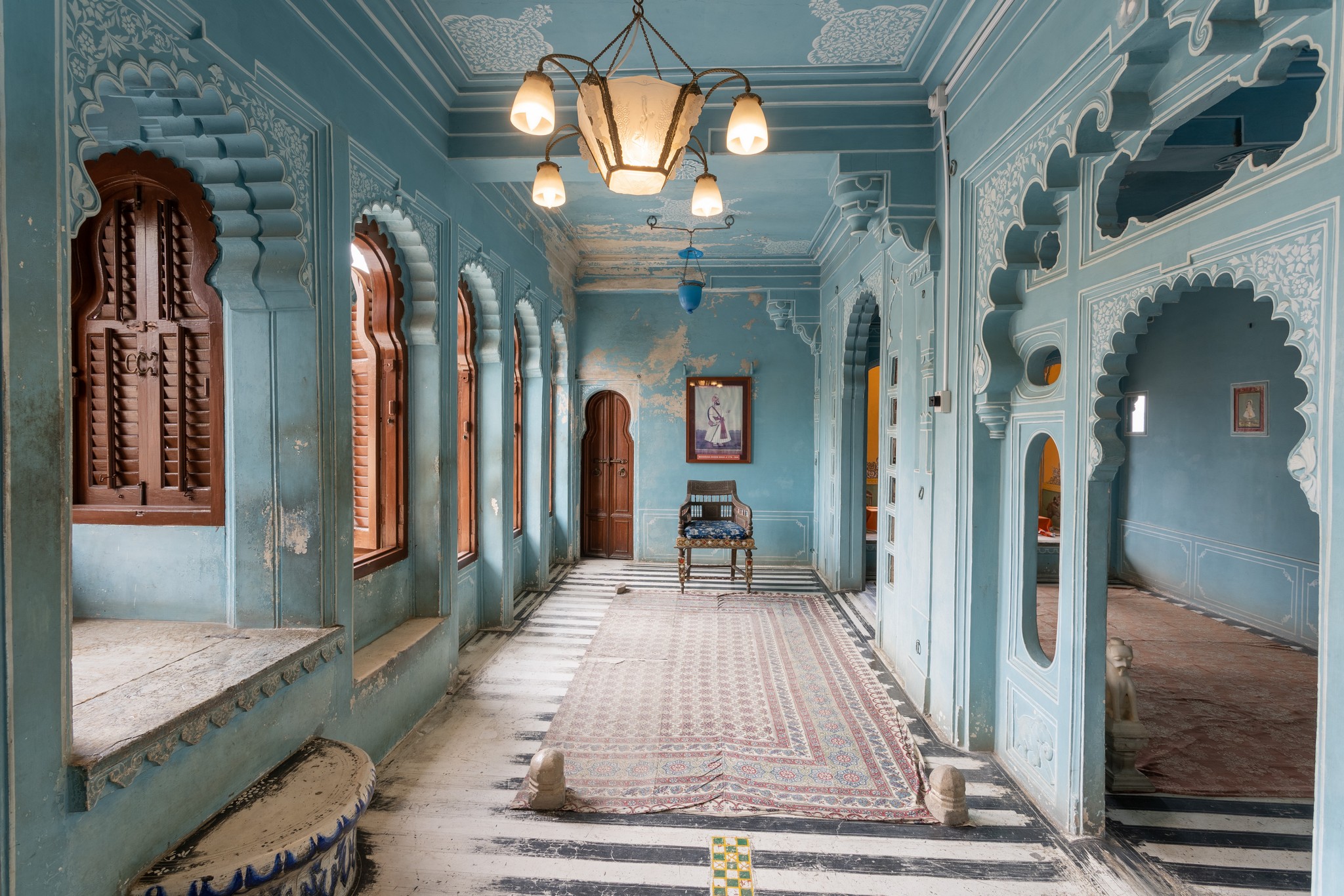 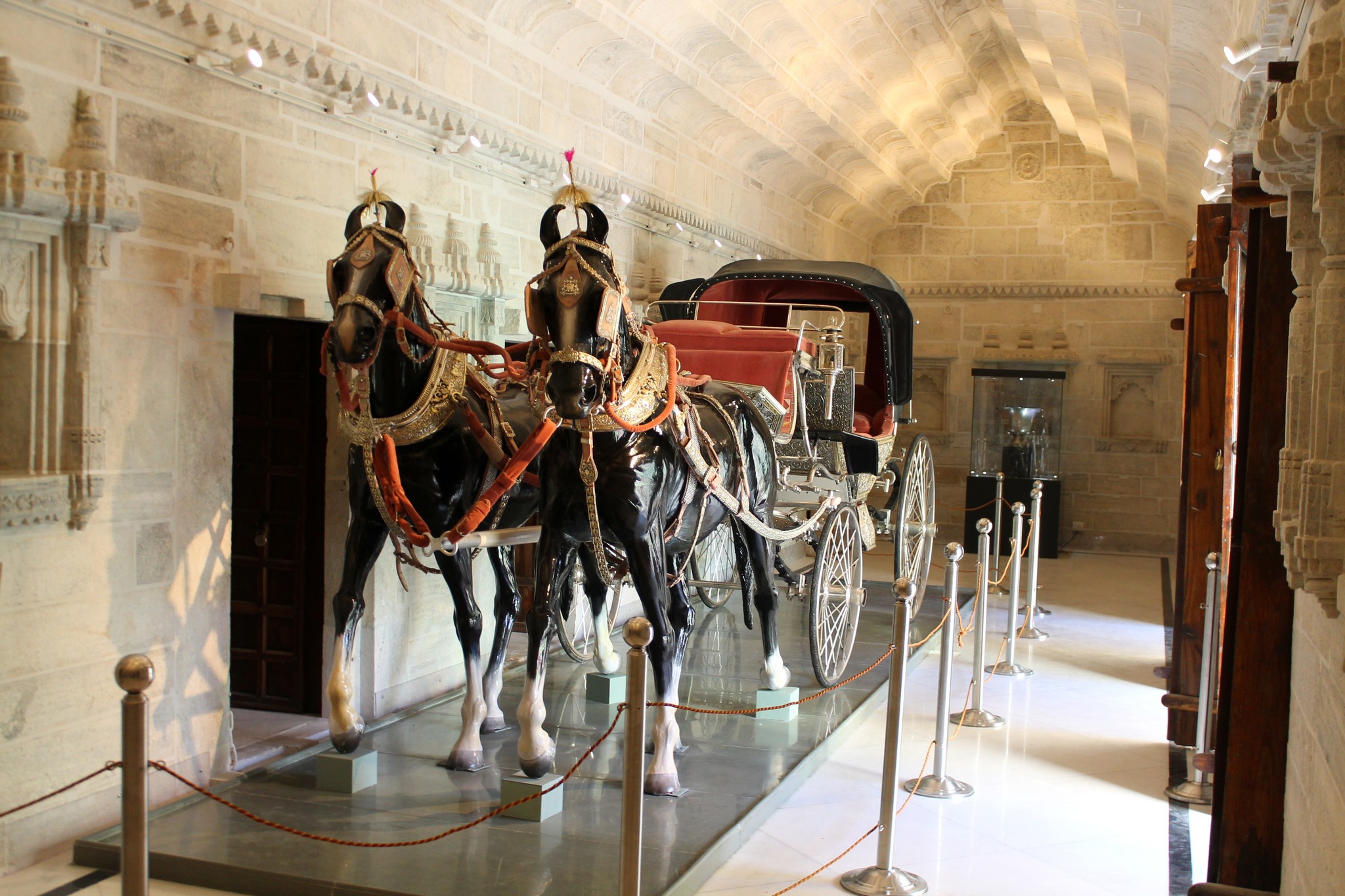 Getting there
Rail- Udaipur Railway Station
Road- Bus/Private vehicle/ cab – landmark: Jagdish Chowk
Air- Maharana Pratap Airport, Dabok
Opening Days
Sunday
Monday
Tuesday
Wednesday
Thursday
Friday
Saturday
Public holidays
Opening Time
09:30 a.m.
Closing Time
05:30 p.m.
Other Information
Ticket sales close at 4.45pm
The best time of the day to visit the museum?
Early morning, during opening hours, for the best time and least crowded visit. The Museum receives major footfall on festive and national holidays.
Interesting things about the Museum
1. The Palace is an architectural marvel that fuses together several styles and was built over a period of 450+ years in traditional Rajasthani and Mughal architectural styles. The Baadi Mahal, for example, consists of pillared courtyards surrounding a Mughal garden built in the chaharbagh style. On one end of this area is a baradari with a marble tank and fountain. The palace is embellished with chattris and jharokhas overlooking the old city and lake Pichola.
The palace is located on a hill, is surrounded by the lush green Aravalli ranges, and has the pristine Lake Pichola in its precincts.
2. It was one of the first palaces to be converted into a Museum, open to the public, and is one of the largest in India in terms of its size
3. Amongst the several interesting pieces that form a part of the collection, the arms and armour of the legendary Rajput warrior king, Maharana Pratap Singh is a prime attraction for visitors.
4. It is a Living Museum; the traditions are kept alive, and are celebrated with the same gusto as they were in around the 16th century or so. Several objects from the Museum transform into objects of ritual or tradition, as part of the celebrations. The crafts, skills, and families associated with the Palace have been retained and encouraged to grow in their respective fields.
5. An exhibition, 'Portraying the City Palace Museum, Udaipur through brush and lens' in the Fateh Niwas Gallery shows the photographic journey of the Mewar rulers with 50 watercolors mounted alongside their photographic counterparts.
6. The silver objects housed in the silver gallery are used for the celebration of festivals by the Mewar royal family. For instance, the Ram Rewari is a portable shrine which is used in the festivities of the Jal-Zoolni Ekadashi.