The Kota Garh Museum, situated in the rambling palace complex on the banks of the Chambal in South-East Rajasthan is the most important tourist destination in Kota. The old city has three sets of concentric walls which have been built over time as the city has grown. The thickest and most recent set was built under the Dewan Zalim Singh in the early nineteenth century and forms some of the most impressive fortifications in India. The foundation of the fort can be traced back to 1264 and Kotah officially became a separate state from Bundi in 1624 under Rao Madho Singh, hence the name of the family trust, Rao Madho Singh Museum Trust. The Trust was formed in 1970 at the initiative of M.K. Brijraj Singh under his father, Maharao Bhim Singh with the object of setting up a museum to educate the public about the history of Kotah State and to preserve Kota’s heritage for future generations. (The State and Royal Family spell Kotah with an ‘h’, and modern Kota post-independence is spelt without an ‘h’.)

Pandit Madan Mohan Shastri, who had just retired as Curator of the Rajasthan State Museum in Kota, was instrumental in helping M.K. Brijraj Singh set up the museum. They were aided by Thakur Jaswant Singh and others.

In 1960 the Kota Barrage had been built across the River Chambal right next to the Palace complex and some of the buildings had been damaged and flooded as a result.

The Garh had not been the primary residence of the Royal Family since Umed Bhavan Palace (now a Welcome Group Heritage Hotel ) had been built at the beginning of the twentieth century, but it was regularly used for ceremonials and worship, particularly at Dusshera, the most important festival in the Kota calendar. Parts of the complex had been leased to schools and colleges and still are. The Government Museum was in the City Palace for some years but moved out in the 1990s.

The Palace is most famous for its wall paintings, the best of which are in the Bada Mahal. The museum also has an excellent collection of silver howdahs and palanquins as well as Royal memorabilia including garments, weapons, musical and astronomical instruments and games. The most prestigious item is the famous copper-gilt mahi-o-maratib or ‘fish and dignities’ standard which was presented by the Mughal Emperor Muhammad Shah to Maharao Bhim Singh I in 1720. It is the single most important Mughal honour enjoyed by the Maharaos of Kotah.

Photography
Yes
Cafeteria
No
Museum shop
Yes
Wheelchair friendly
No
Restroom
Yes
Drinking water
No
Locker room
No
Parking
Yes
Information in Braille
No
Workshops/seminars/lectures
No
Garden/picnic area
Yes
Audio/visual guides
No
Guided tours
No
Library and archives services
No
IT facilities ( Photocopying, printing, computer )
No
Any other facilities
Dil-Kusha-Bagh is a marriage garden within the palace complex with a view over the river. There is also bookable accommodation.
Auditorium
No
Conference/ Seminar hall
No
Museum membership
No
Conservation lab
No
Research lab
No
Who manages the museum?
Private Organization
Email
rmsmtkota@gmail.com
Person-in-charge of the museum
Curator
First Name
Pt. Ashutosh
Last Name
Daddich
Mobile no.
+91 9414859488
Reference Link
https://www.kotahgarh.com/
What is the average duration to see the museum?
1-2 hours
Is the museum currently closed?
No
Image for museum exterior/building 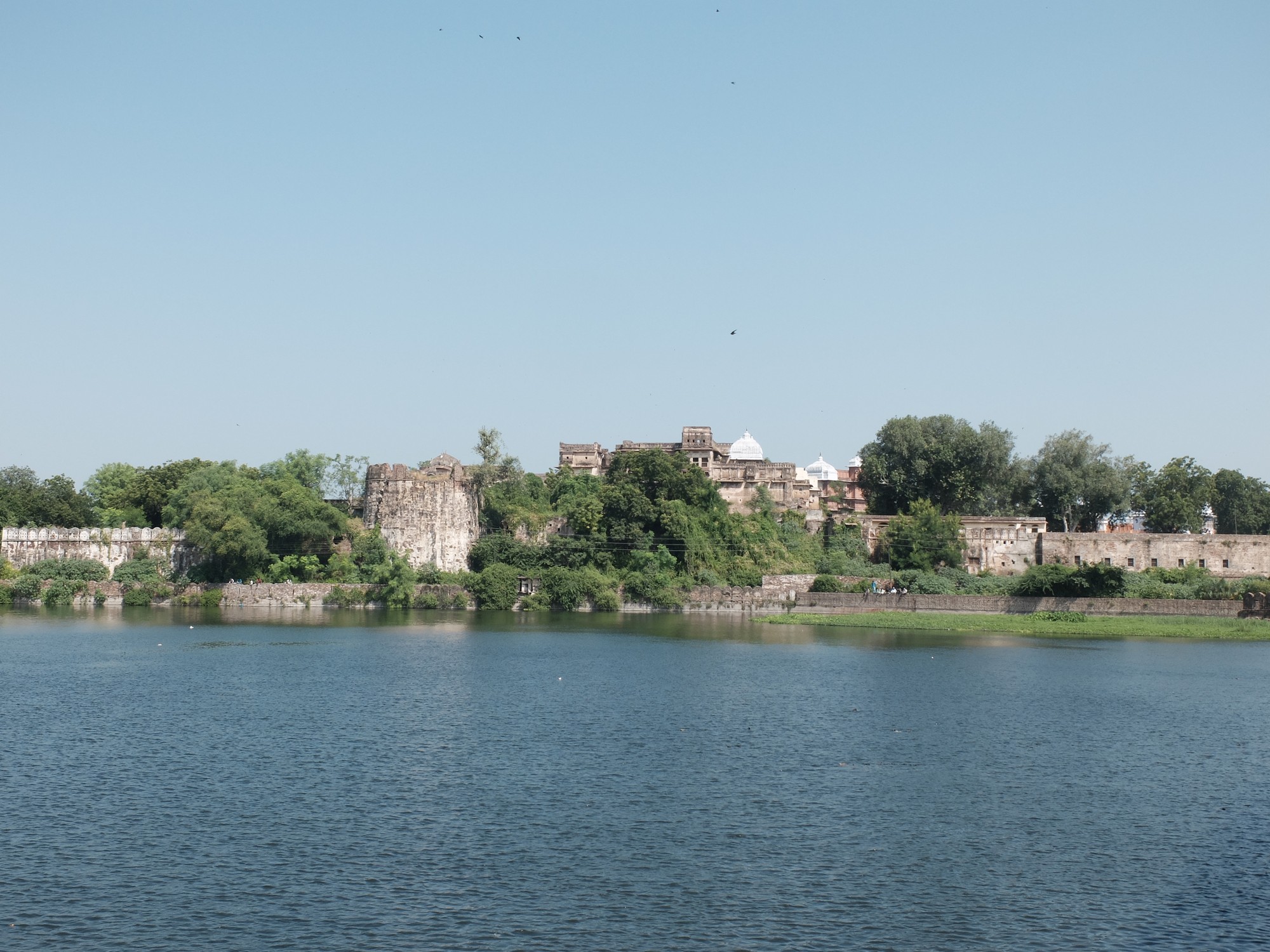 View of the Palace Complex from across the River Chambal below the barrage. This photo was taken in 2015 before the new bridge just below the barrage and so this view can no longer be seen.  The wedding venue Dil Kush Bagh or the Garden of Happiness is the elegant domed white section on the left. 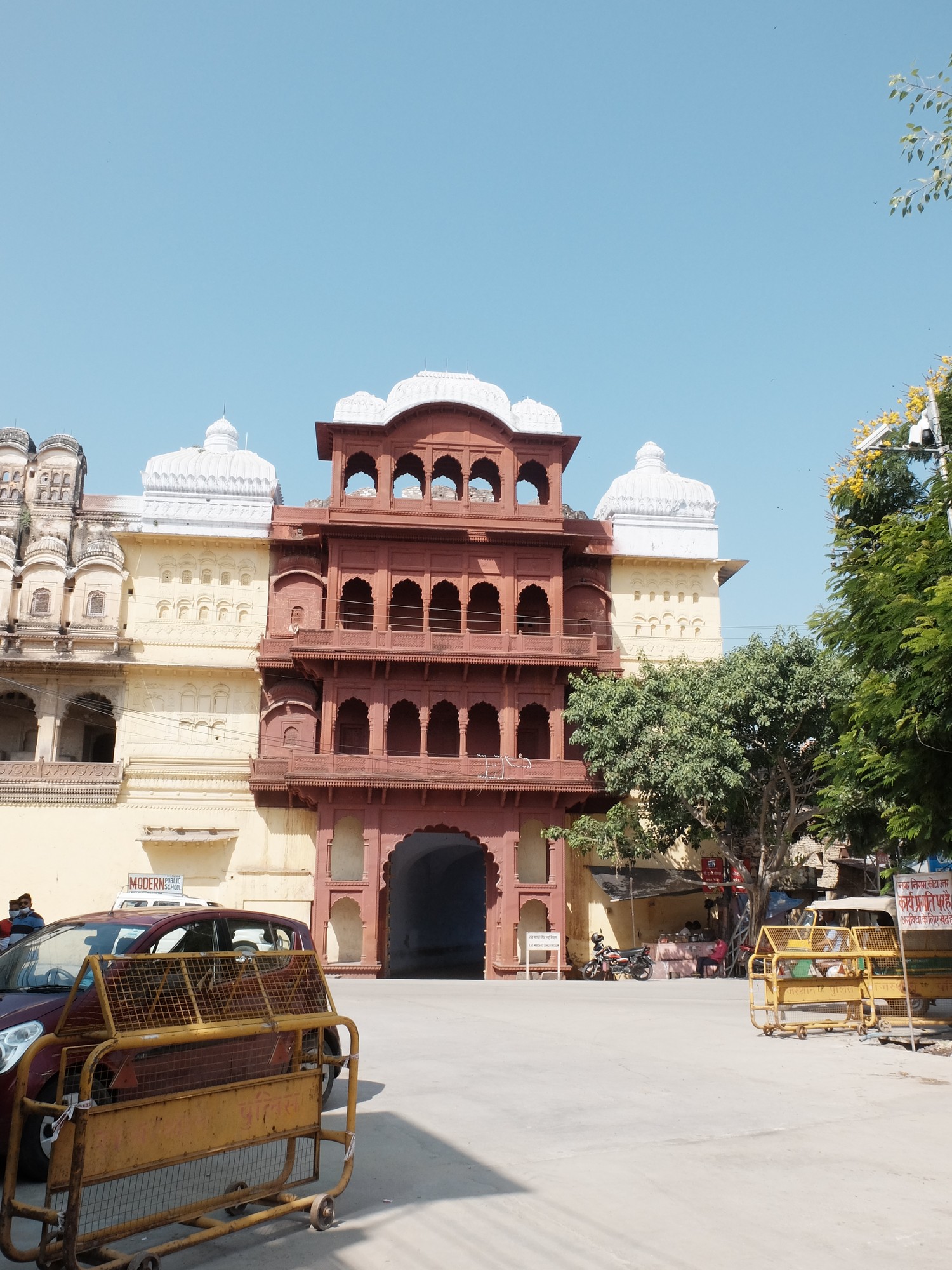 This was built by Maharao Umed Singh IInd in 1910 and became the main entrance for the fort replacing a smaller older one to the south. Hawa Mahal, Palace of Winds, over the gate enabled the Royal women to look down on events in the square outside without being seen. 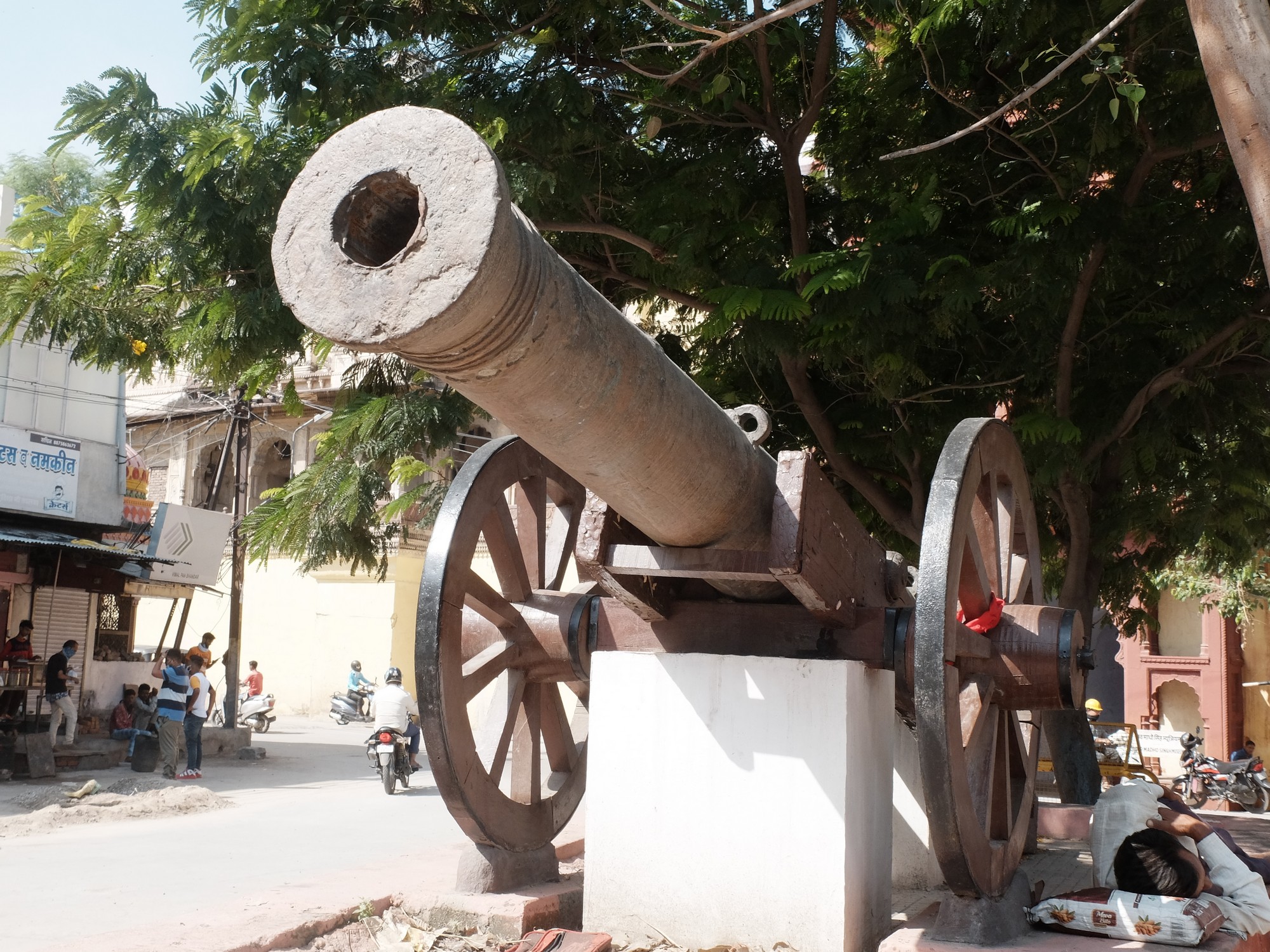 Kota was famous throughout the sub-continent for the excellence of its foundries and many cannons are to be seen around the city. This is one of the bigger ones. 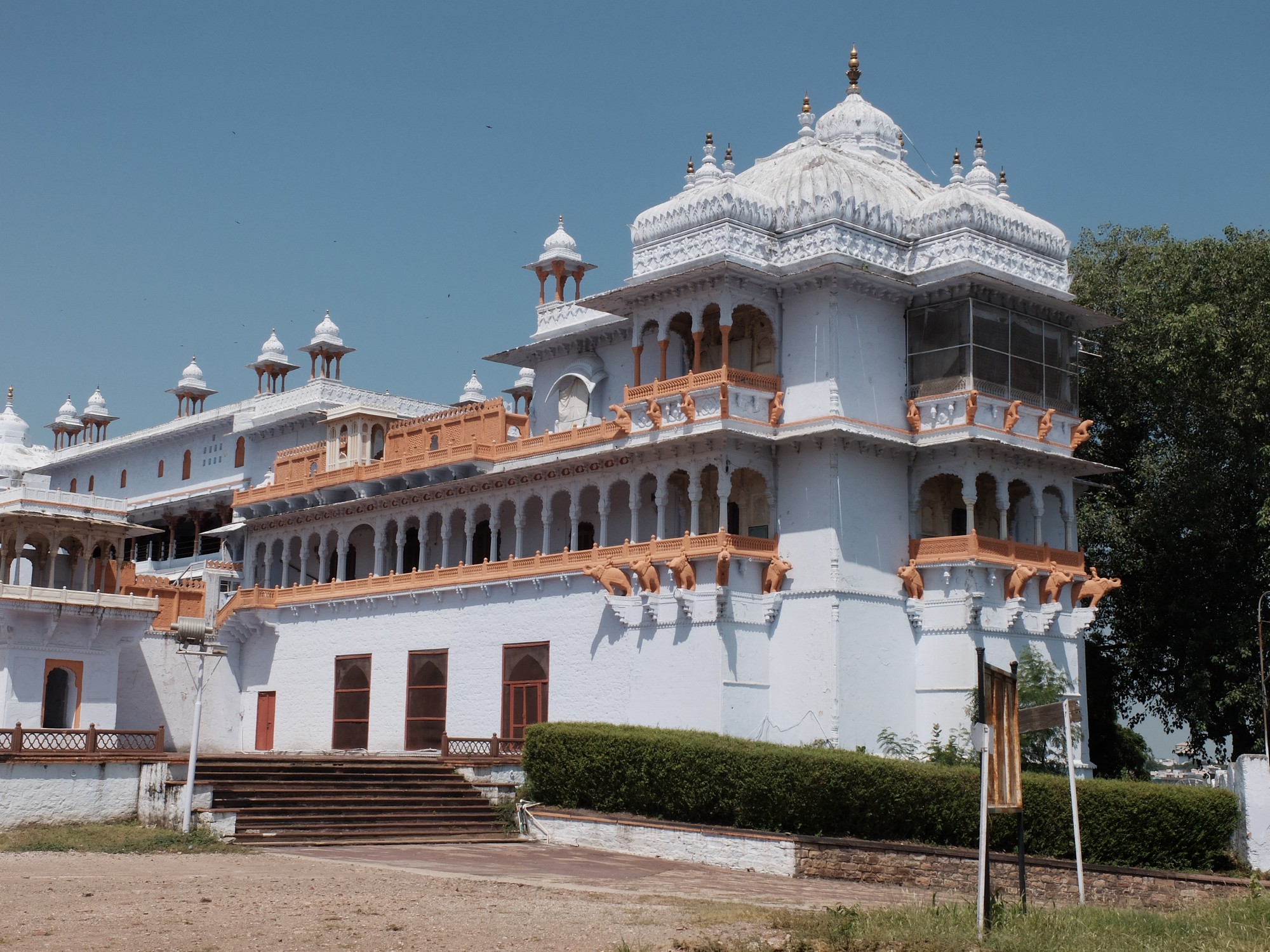 The world-famous wall paintings are in the Bada Mahal which is the top right portion in this photograph. It was built in mid - late 18th century by Maharao Umed Singh 1st. 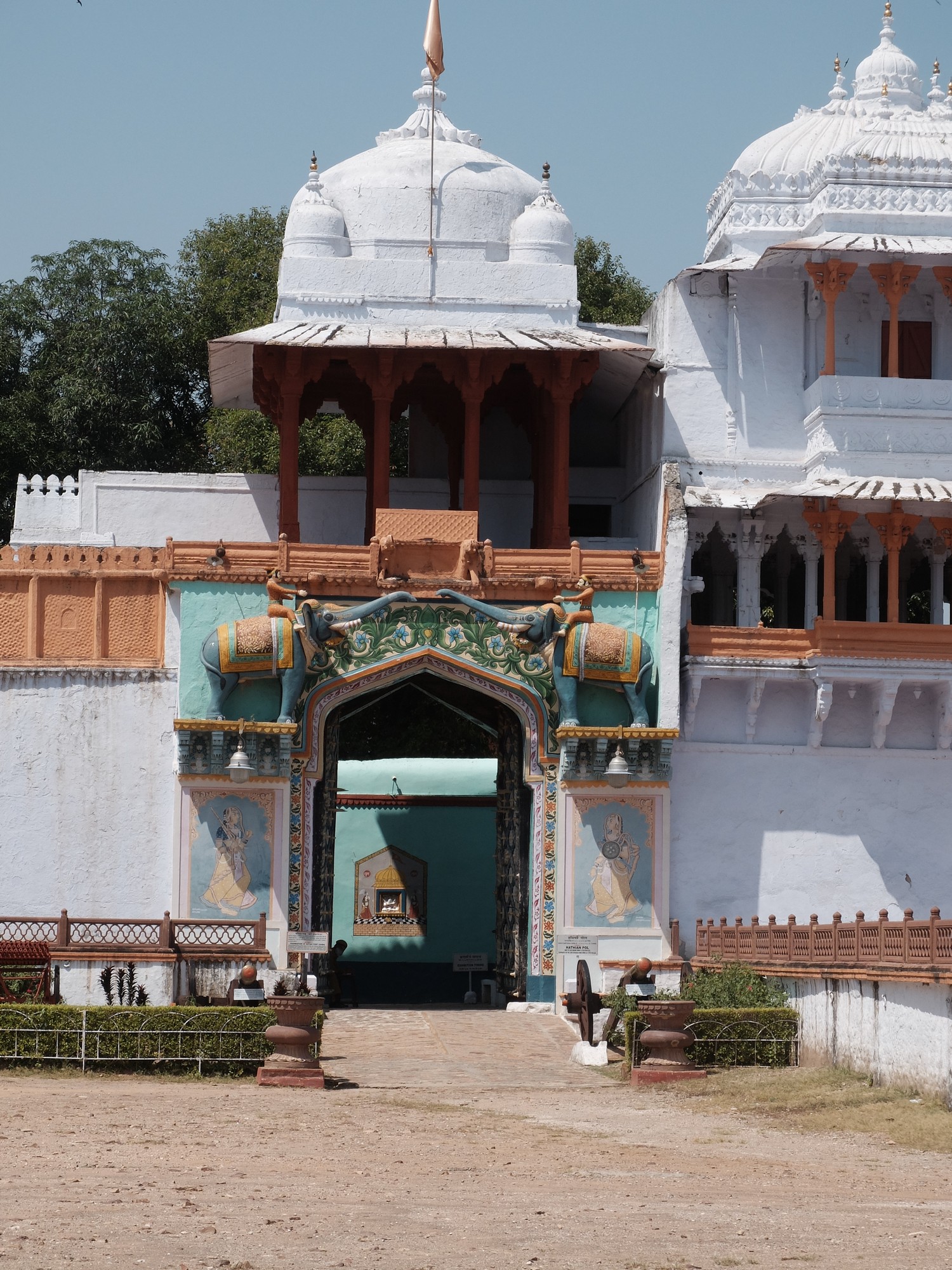 This was built by Rao Madho Singh in 1624. Kotah was originally part of Bundi state which had a Hatian Pol with saluting elephants over it. These elephants were removed as war booty and installed at Kotah by Maharao Bhim Singh around 1720 when Bundi, briefly, became part of Kotah State. Notice the spikes high up on the gate which was to deter charging elephants.

The tradition of wall painting can be seen on the gate and there is some very fine work on the ceiling inside. There is a collection of small cannons outside the gate. 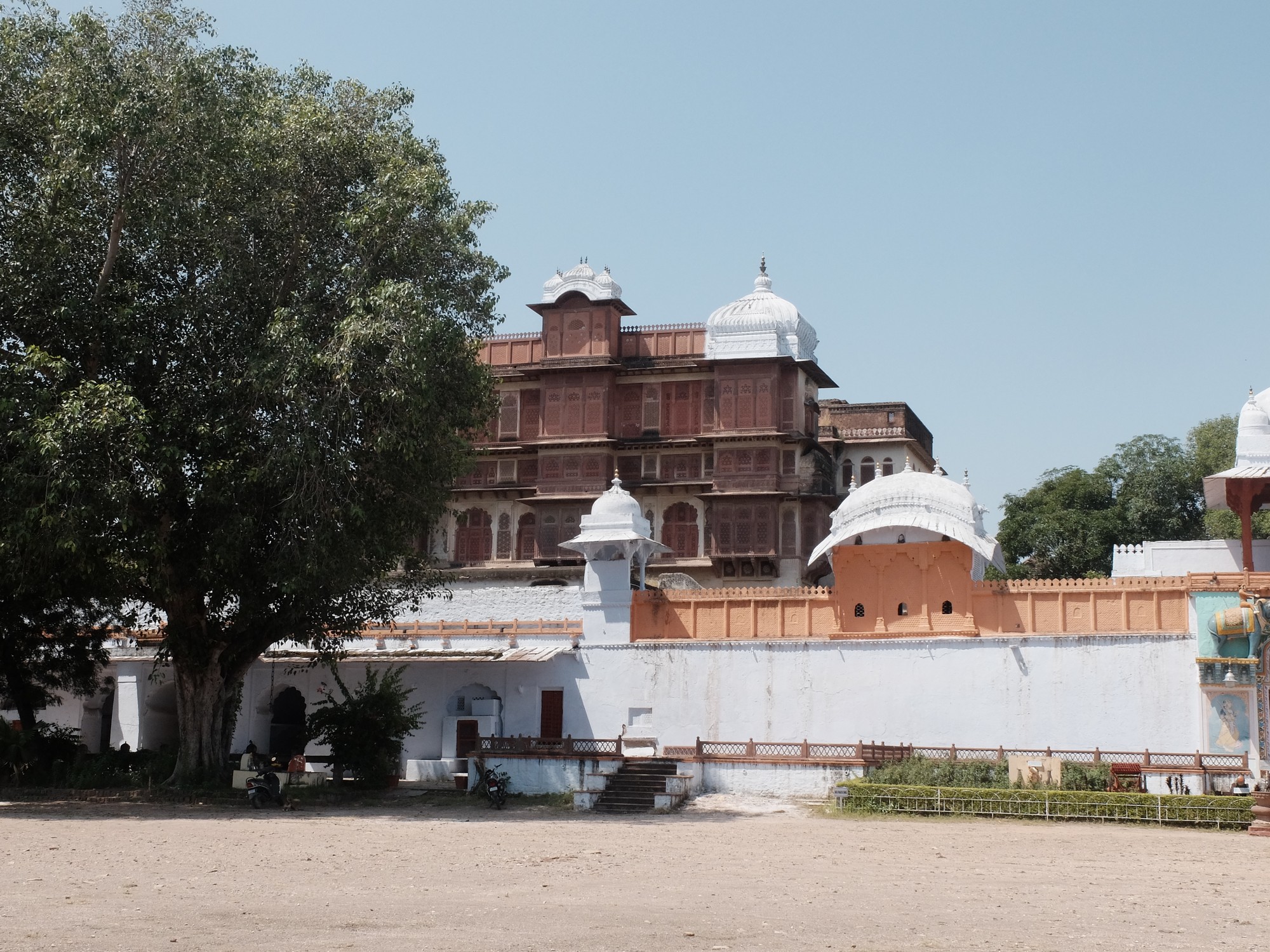 The new Zenana Mahal was built for the Maharanis by Maharao Umed Singh II in the late nineteenth century. It towers over the rest of the Palace and can be seen from afar. The men’s portion or Mardana is to the right

Getting there
• The nearest airports are Jaipur 242kms and Udaipur 260kms.
• An excellent train service from most parts of India connects Kota Junction (KOTA) The station is 8.5 kms from the Garh.
• The bus station is 3-5 kms from the Garh depending on the route
• Access is difficult as the Garh is in the old city. It is best to approach from the Kunadi west bank of the Chambal over the new bridge if coming by car or taxi.

Opening Days
Sunday
Monday
Tuesday
Wednesday
Thursday
Friday
Saturday
Opening Time
10:00 a.m.
Closing Time
04:30 a.m.
The best time of the day to visit the museum?
11.00am-1.00am if school groups are visiting.
Interesting things about the Museum
1. The Dusshera procession starts from Jaleb Chowk in the Garh and includes an elephant and M.K. Ijyaraj Singh in an open jeep who fires the arrow at Ravan when they reach the Dusshera Ground. This ground used to be a large open space outside the city walls and there was a cattle fair and a mela lasting for a month. The cattle fair has been removed and has faded away and the area has been ‘developed’ by the authorities leading to less space for the enormous crowds which pour into Kota to enjoy the mela.
2.From the early 18th century, Kotah became a place of pilgrimage and lively philosophical debate for the Krishnaite sect of the Vallabhi Sampradaya (also known as Pushtimarg.) Their second most important temple housing the deity Shri Mathureshji is close to the Fort. It attracts crowds from all over India. Kotah’s tutelary (guardian) deity is Shri Brijnathji who can be seen in many of the paintings in the Garh.
3. here is a particular style of turban worn in Kota called the Kota paag and one can be bought ready-made in the Museum shop.